Most known museums in Yerevan

History Museum of Armenia
It’s simply extraordinary collection of Bronze Age artefacts make this museum Armenia's preeminent cultural institution and an essential stop on every visitor's itinerary. Many of the items were excavated at the Necropolis of Lchashen near Lake Sevan in the 1950s, and it's hard to do them justice in words. The collection includes bronze sculptures, four-wheeled wooden chariots with metal decoration, carved stone fertility symbols, and a magnificent array of weapons and armour (arrows, quivers, helmets and shields).
Other exhibits of note include medieval khachkars, 18th- and 19th-century Armenian costumes, a 5500-year-old leather shoe discovered in a cave in Vayots Dzor region in 2008, carpets and embroidered amices (liturgical vestments). The only disappointing section is that concentrating on Soviet Armenia, which ostentatiously eschews English-language labelling (all other exhibits have Armenian, Russian and English labels).

Matenadaran - museum of manuscripts
Matenadaran is one of the most significant historical and scientific achievements of the modern Republic of Armenia. This research center and museum in Yerevan is considered to be among the richest repositories of ancient manuscripts throughout the world.
Matenadaran possesses more than 17000 manuscripts and 30000 historical documents, mainly drawn from different Armenian areas, churches and monasteries, as well as personal collections, provided by private donors.
The books, manuscripts and other works, held at Matenadaran museum of Yerevan, cover a broad array of issues and various subjects, such as chronology, history, medicine, philosophy, arts history and even cosmology.
In Matenadaran, along with the Armenian documents and manuscripts, you can find very large collections of around 2000 works in such languages as Russian, Japanese, Persian, Arabic and Hebrew. The director of Matenadaran is Hrachya Tamrazyan.

Megerian Carpet Museum in Yerevan
Armenian carpet – this single word tells a lot about Armenia and its culture. You can find an entire history and culture in it. Through these magic “texture” Armenians used to and till now express the most interesting part of their culture.
Having an Armenian carpet in your house means being a little bit closer to the Armenian spirit and to Armenian itself. You can hardly find an Armenian house without a carpet.
That is the reason why there are so many carpet shops and museums in Armenia and particularly in Yerevan. One of them is Megerian Carpet Museum.
Megerian carpets are an extraordinary work of art. Megerian carpets include a museum, a shop, where you can choose a variety of carpets and what’s more interesting, you can see the making process of Megerian carpets.
Now let’s get into discovering more interesting and fascinating facts about Armenian carpets and Megerian Carpets in particular.

Erebuni Historical & Archaeological Museum-Reserve
This archaeological site dates from 782 BC, three decades before Rome was established. It gives an excellent insight into daily life in the palace of Argishti I, one of the greatest kings of Urartu. At the foot of the hill, a Soviet-era museum displays artefacts from the palace excavations including some extraordinary silver rhythons (drinking horns), as well as objects found when an Urartian tomb was uncovered in Yerevan in 1984 during construction of a factory.
The first stage of excavations here started in 1950, after a farmer unearthed an inscribed stone tablet. Archaeologists swooped in and soon found a large cuneiform slab with the inscriptions of Argishti I confirming the date when the fortress was constructed. They went on to uncover the remains of courtyards, halls, temples and rooms that were part of the royal palace. Dozens of Urartian and Achaemenid artefacts and mural fragments were also found, many of which are now displayed in the museum.
The view from the fortress takes in parts of the city and Karmir Blur (Red Hill), where excavations have revealed similar ancient finds. Frescoes in the reconstructed palace wall are replicas. There are huge storerooms for wheat, along with tonir (oven pits) and gigantic pitchers for wine and oil. There’s also a place for animal sacrifices, and workshops (still buried) for making tools.

Mother Armenia Military Museum
There's symbolism aplenty in this huge memorial above the Cascade. Twenty-two metres high, Mother Armenia's stern visage, military stance and massive sword project a clear message: Armenia has had its fill of invasions, massacres and repression, and will fight to preserve its nationhood and the lives of its citizens. Inside the pedestal is a military museum documenting Armenian involvement in WW2 (300,000 Armenians died, half of those sent to fight) as well as the bloody 1988–94 Karabakh War with Azerbaijan.
The museum opened in 1950 and was originally topped with a 17m statue of Stalin. This was replaced with Ara Harutyunyan's Mother Armenia statue in 1967. One soldier was crushed to death and several were injured when Stalin's statue was wrenched off unannounced one night, leading to grim muttering about Stalin still killing from beyond the grave. Inside, one of the most interesting exhibits deals with Operation Nemesis, a covert action by the Armenian Revolutionary Federation (Dashnaktsutyun) carried out from 1920 to 1922 in which Ottoman political and military figures were assassinated for their roles in the horrific massacres of 1915–16.
Mother Armenia is located in the poorly maintained Haghtanak (Victory) Park, which is also home to a small fun fair popular with locals on weekends. To get here, take the elevator in the Cascade to the top courtyard and from there walk up the stairs to the huge concrete platform. From the top of the platform, walk to the main road, take the underpass and enter the park.

Cafesjian Center for the Arts
Housed in a vast flight of stone steps known as the Cascade, this arts centre is one of the city's major cultural attractions. Originally conceived in the 1920s by Soviet architect Alexander Tamanyan as part of his plan to modernize Yerevan, work on the monumental structure finally commenced in the 1980s but stalled after the 1988 earthquake. Eventually, Armenian-American philanthropist Gerard Cafesjian came to the rescue, funding its completion and transformation into a multi-level contemporary arts space.
The centre's two external garden galleries and five exhibition halls are accessed via an internal escalator that operates from 8am to 8pm daily. Next to the escalator are platforms where artworks from Cafesjian's personal collection of 20th-century and contemporary sculpture and furniture are displayed. There's a decidedly quirky theme at work here, with pieces such as Studio 65 for Gufram's Marilyn 'Bocca' Lip Sofa,Giogio Laveri's Lipstick and Richard Cresswell's Butterfly Seat three of many works catching the eye on the trip up and down. They and the garden galleries, which feature recessed fountains, modern khachkars(stone steles featuring carved crosses) and contemporary sculptures, can be visited free of charge. Visitors must have an admission ticket to enter the internal galleries.
On the ground floor, the large gift shop is one of the best places in the city to source quality souvenirs. There's also a welcoming and well-stocked art library with a small children's section.
In front of the Cascade, a sculpture garden features three huge bronze works by Colombian-Italian sculptor Fernando Botero: Cat, Roman Warrior and Woman Smoking a Cigarette. These sit alongside a whimsical wrought-iron teapot by Joana Vasconcelos, a bright blue kiwi by Peter Woytuk and plenty of other works. The two streets edging the park are home to cafes, bars and restaurants with plenty of outdoor seating.

Armenian Genocide Memorial & Museum
Commemorating the massacre of Armenians in the Ottoman Empire from 1915 to 1922, this institution offers a powerful museum experience similar to that of Israel's Yad Vashem (Holocaust Museum). Designed by architects Arthur Tarkhanyan and Sashur Kalashyan working with artist Hovhannes Khachatryan, the two-storey exhibition space is built into the side of the hill so as not to detract from the monument above. The story of this horrific historical event is told through photographs, documents, newspaper reports and films.
From the museum, a broad pathway flanked by a 100m-long wall engraved with the names of massacred communities leads to the memorial, which was built in 1967. It consists of a 40m-high spire next to a circle of 12 basalt slabs leaning over to guard an eternal flame. The 12 tilted slabs represent the lost provinces of western Armenia, land lost to Turkey in a post-WWI peace deal between Ataturk and Lenin, while the spire has a fine split dividing it into larger and smaller needles, the smaller one representing western Armenia.
In the grounds there is a stand of trees planted by foreign leaders who use the term genocide to describe the events that occurred. The complex is on Tsitsernakaberd Hill (Fortress of Swallows) across the Hrazdan Gorge from central Yerevan. 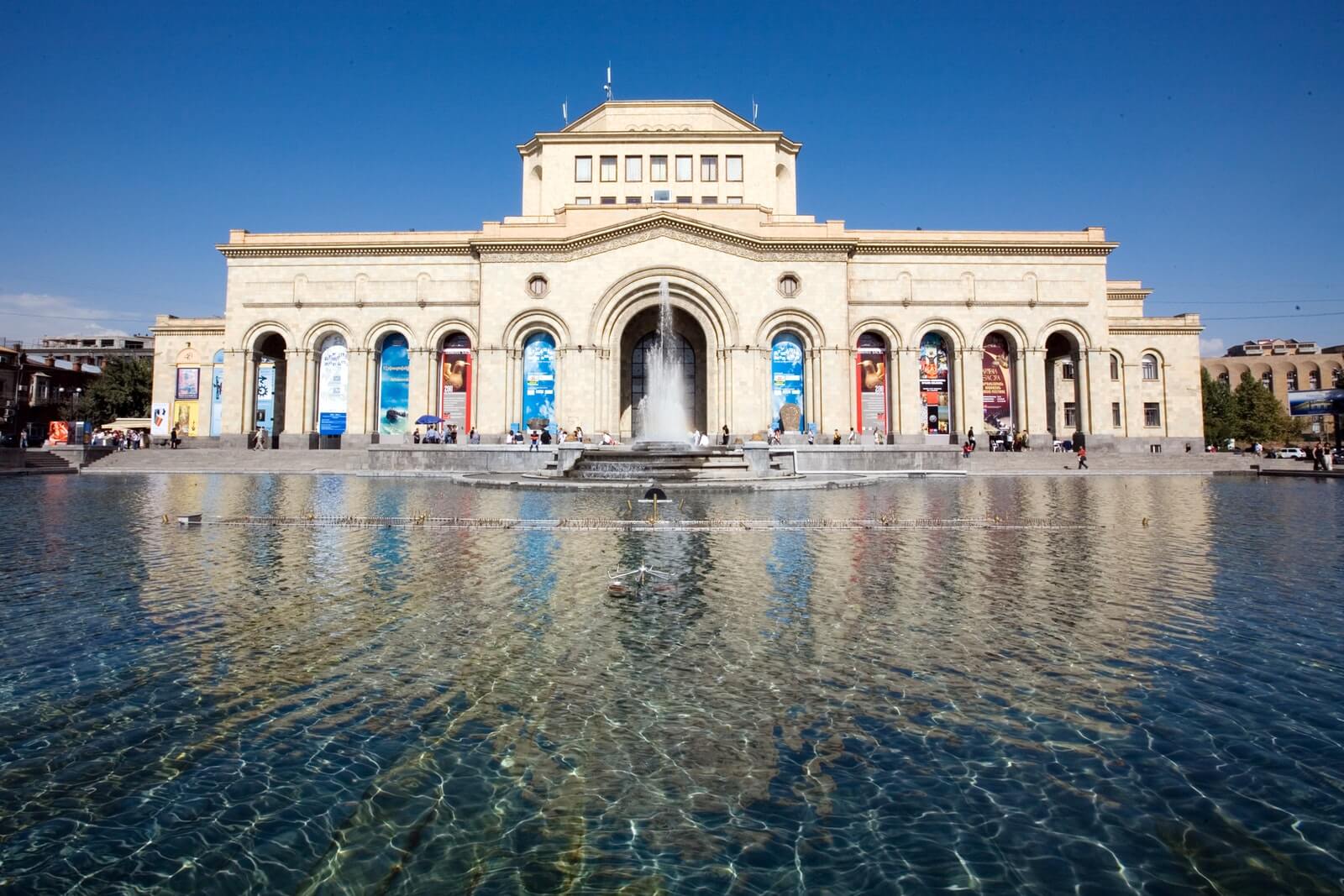