Yerevan city is the capital of the Republic of Armenia. It is an amazing city where history meets the future, and, perhaps, that is why Yerevan is so popular with tourists and foreigners from all over the world.

Yerevan is located in the Ararat valley, along the River Hrazdan and is one of the world's oldest cities; it is now 2800 years old!
It is the largest and most populated city of Armenia. Yerevan is in fact the 13th capital city of Armenia.
Yerevan (Erebuni) was founded in 782 B.C. by Armenian king Argishti I. But it has been Armenia’s administrative, industrial and cultural center only since 1918.
Total area of today’s Yerevan is 223 km2 (86 sq mi), and the population number is more than 1 million people.

Things to see in Yerevan #1: Republic Square Yerevan
Any tourist, who visits Armenia, should, by all means, see the Republic Square in Yerevan. It is considered to be one of the main symbols of the capital city and the most popular “must see” place for foreigners.
The Republic Square has very unique architecture: it is a wonderful combination of Armenian traditional architecture elements with modern ones. The Square is oval shaped and resembles an Armenian carpet, if you look at it from above.
The Square is surrounded by governmental and non-governmental various significant buildings that are also worth to be seen and highly appreciated. Dancing and singing fountains, the National Gallery and the History Museum, nearby parks, amazing cafes is what makes the Republic square a significantly special place to visit.

Things to see in Yerevan #2: Climb the Longest Stairs of Yerevan!
Visiting and admiring Yerevan’s cascade surely can be found in every touristic guide. But, do they also say how fun it is to climb to the top of it?
Well, let’s admit that’s not an easy task, however, we bet you’ll be rewarded afterwards. First off, don’t forget about burning some calories. We know that Armenian food is delish and it’s not easy to resist. You know what? You don’t even need to resist, all you need is to climb cascade afterwards- you’ll burn all the calories you ate.
Second, is the magnificent city view that you’ll see after reaching to the top. If you want to enjoy the city view in its full colors, then you’ll have to climb right the top of the Cascade stairs.

Things to see in Yerevan #3: Window shop on Northern Avenue
This pedestrian only street is in the Kentron area, linking Abovyan Street with Freedom Square (Tumanyan Street). The wide avenue opened in 2007 and is 450 metres long and 27 metres wide.
Northern Avenue is home to 11 buildings and 4 small squares. It also features an underground mall and car park.
Some of Yerevan’s most upscale shops can be found along the pedestrian avenue, including Armani, Steve Madden, Desigual and Burberry. There are also a number of chain fast food restaurants and trendy coffee shops that are great for resting and people watching.

Things to see in Yerevan #4: Learn about the city’s history
Yerevan is a pretty old city that boasts a very long history, some of which is gruesome and some that is not. A great way to learn about the city’s past is to head to its museums.
The History Museum of Armenia has a collection of over 400,000 objects and is arguably the best museum for those that want to learn more about the city, as well as the entire country. It features Ethnography, Archaeology, Numismatics and Modern History departments, with collections in each.
The largest collection of Armenian art can be found at the National Gallery of Armenia, though it also displays work from numerous European and Russian artists. For a look into the country’s not so nice past, check out the Armenian Genocide Museum-Institute.

Things to see in Yerevan #5: Visit the repository of ancient manuscripts
If you are a lover or just interested in ancient illuminated manuscripts, then Matenadaran is the very place for you to visit in Yerevan!
Matenadaran is a repository of ancient manuscripts, as well as a research institute and museum in Armenia. There are 17 000 manuscripts and 30 000 historical documents under the possession of Matenadaran,  covering a wide range of subjects, such as history, geography, literature, grammar, philosophy, art, medicine, and even cosmography both in Armenian and in many other languages.
Matenadaran is a house to the largest collection of Armenian manuscripts and we can even say, that it is one of the largest collections of such kind in the world. So, this makes Matenadaran a wonderful tourism attraction what should be visited.

Things to see in Yerevan #6: Shop for local art
The weekend Yerevan Vernissage is a large open-air market that sits along Aram and Buzand streets, near the Republic Square metro. The market opened in the 1980s by a group of local artists to display and sell their work.
The Yerevan Vernissage has become so large and popular that it moved from its original home next to Charles Aznavour Square to where it is today. It stretches from the Republic Square metro station to the statue of Vardan Mamikonyan.
This is a great place to snatch up a variety of traditional Armenian art work, such as rugs, wood carvings, paintings, musical instruments and jewellery. Another great place to purchase paintings is at Saryan Park.

Things to see in Yerevan #7: Sip on brandy
Ararat is the oldest brandy company in the country, opening in 1887 by merchant Nerses Tairyants. It later became the supplier of His Imperial Majesty’s court and since then the world-renowned brandy and has been admired by many, including Frank Sinatra, Agatha Christie and Winston Churchill.
The distillery is open for tours, which includes a tasting. The tour takes place in the in-house museum, where visitors learn about the history of the company and the making of this fine alcohol.
In addition to walking around the old cellar, visitors get to taste two or three types of the fine brandy. A visit to Ararat is a must for any brandy connoisseur

Things to see in Yerevan #8: Listen to Music
Yerevan has numerous options for music lovers, be it opera, folk music, rock or even dance music. Restaurants, parks, concert halls, bars and nightclubs all offer music in the city.
The Cascades and Lover’s Park often host concerts in the spring and summer months that are worth checking out. The Yerevan Opera Theatre and Komitas Chamber Music House often have cheap, last minute tickets for operas, symphonies and ballets.
Then there are the nightclubs, pubs, jazz cafés and karaoke bars. These are all appealing to night owls and are a great way to mingle with the locals.

Things to see in Yerevan #9: Enjoy Armenian wine in the famous wine houses/bars in Yerevan
Armenia is one of the oldest country that has produced wine in the world. Visit one of the following wine houses to taste delicious food and amazing Armenian Wine: ENOTECA, INVINO, TAPASTAN, VOSKEVAZ etc. The range of Armenian wines, cheese and salume (pork cold cuts such as salami and proscuitto), basturma and olives are guaranteed impressive. 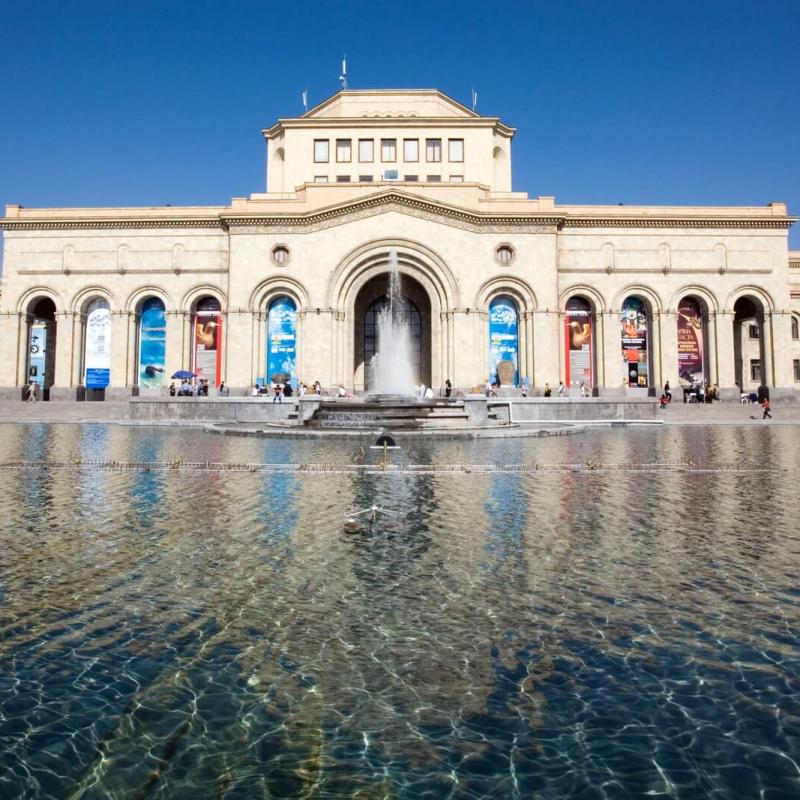 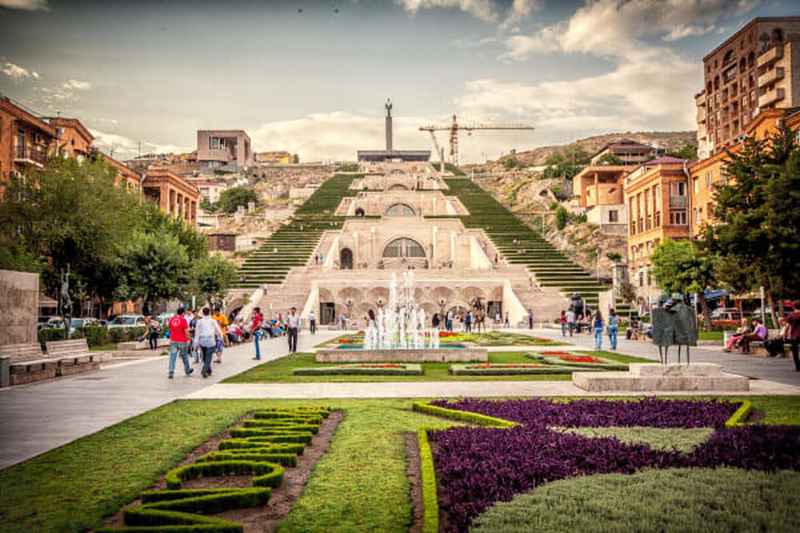 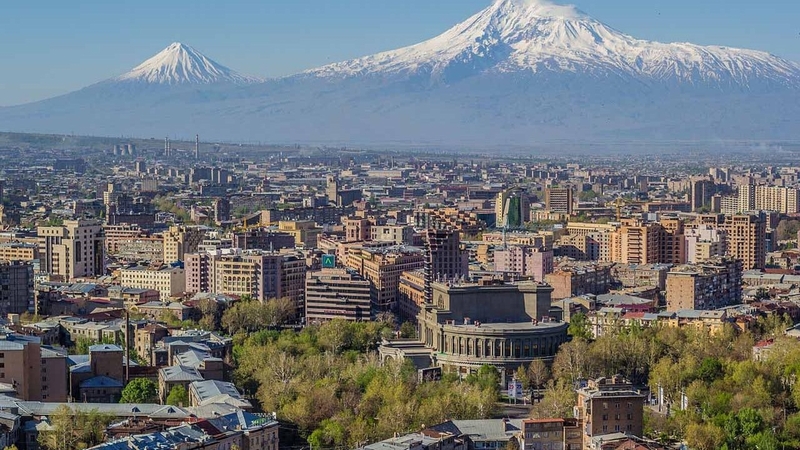 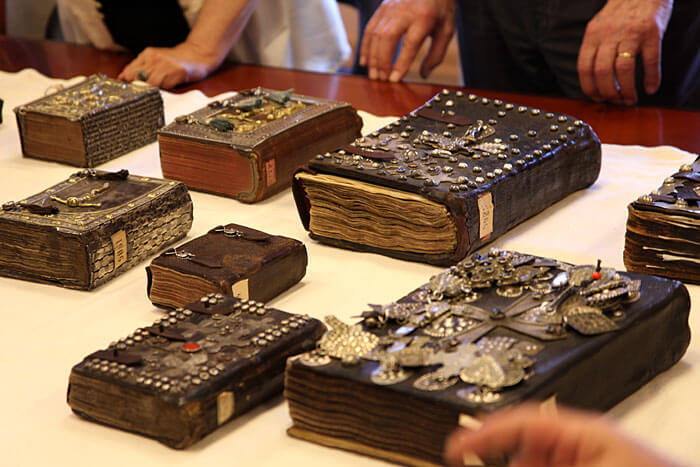 You are invited to take part in our guaranteed departures to explore the enchanting beauty of the most popular-cultural sights.

Off the beaten path: Hiking Tour

Armenia a great destination if you love hiking. The country covers a lot of mountain ranges where you can hike along many routes through breath-taking landscapes and traditional villages. 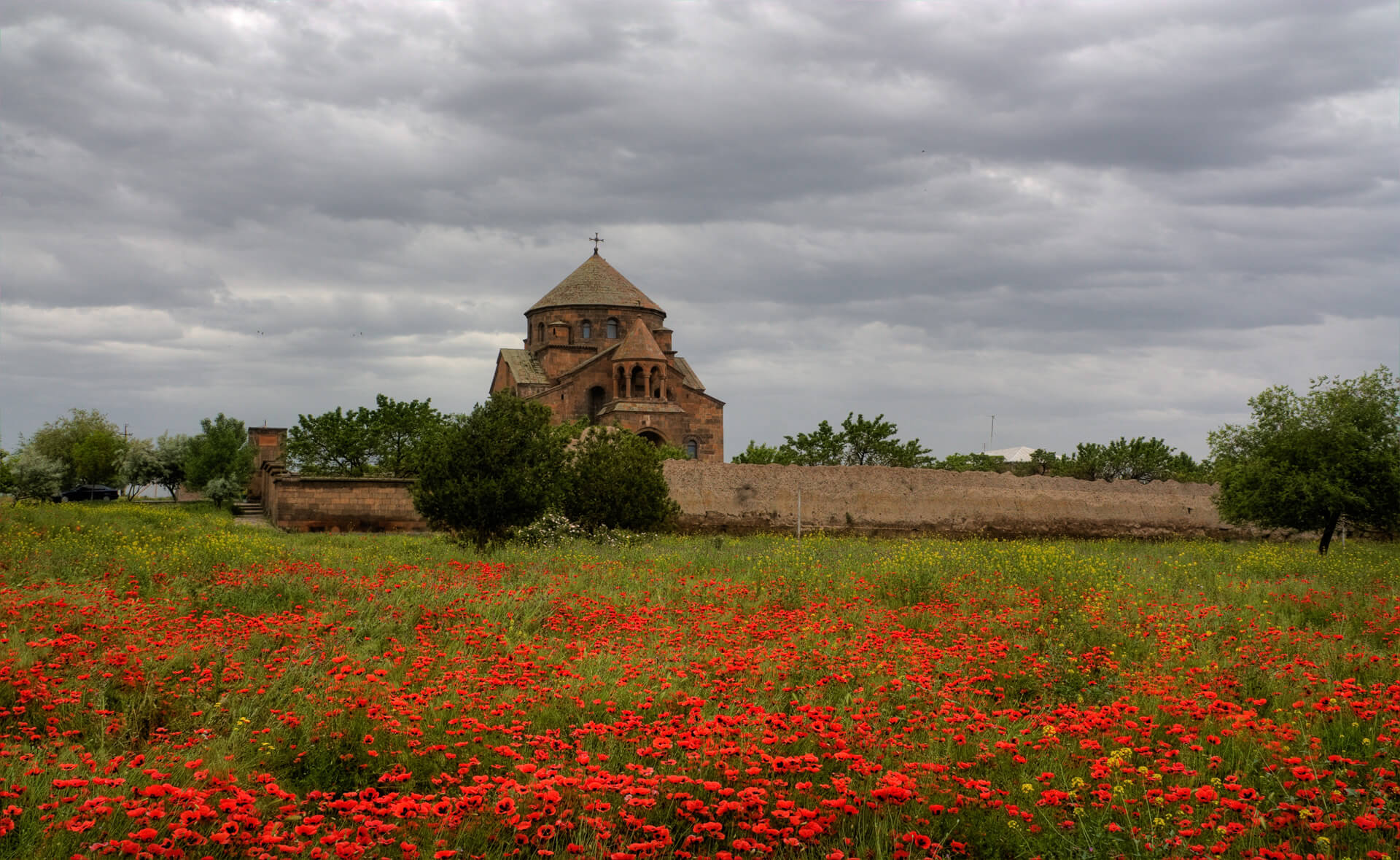 Join to one of our daily scheduled tours to different destinations and explore the enchanting beauty of the most popular-cultural sights. Each of the tours may be booked separately chosen. 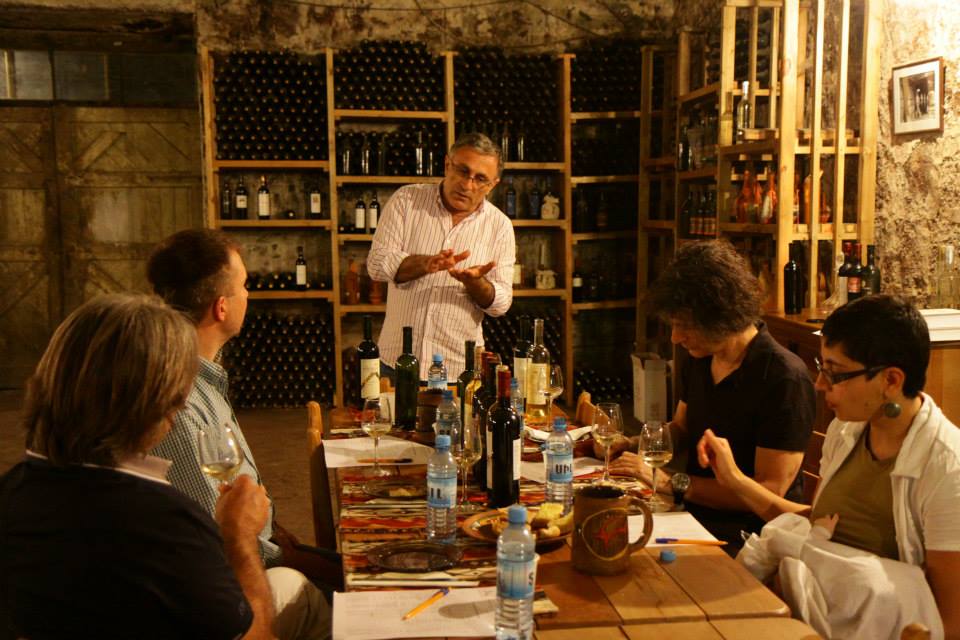 The unique grape varietals indigenous to Armenia, the characteristics that soil, weather, climate, and other environmental factors impart to the grapevines. Armenian wine is also connected across time with a more than six thousand-year-old history of viniculture. 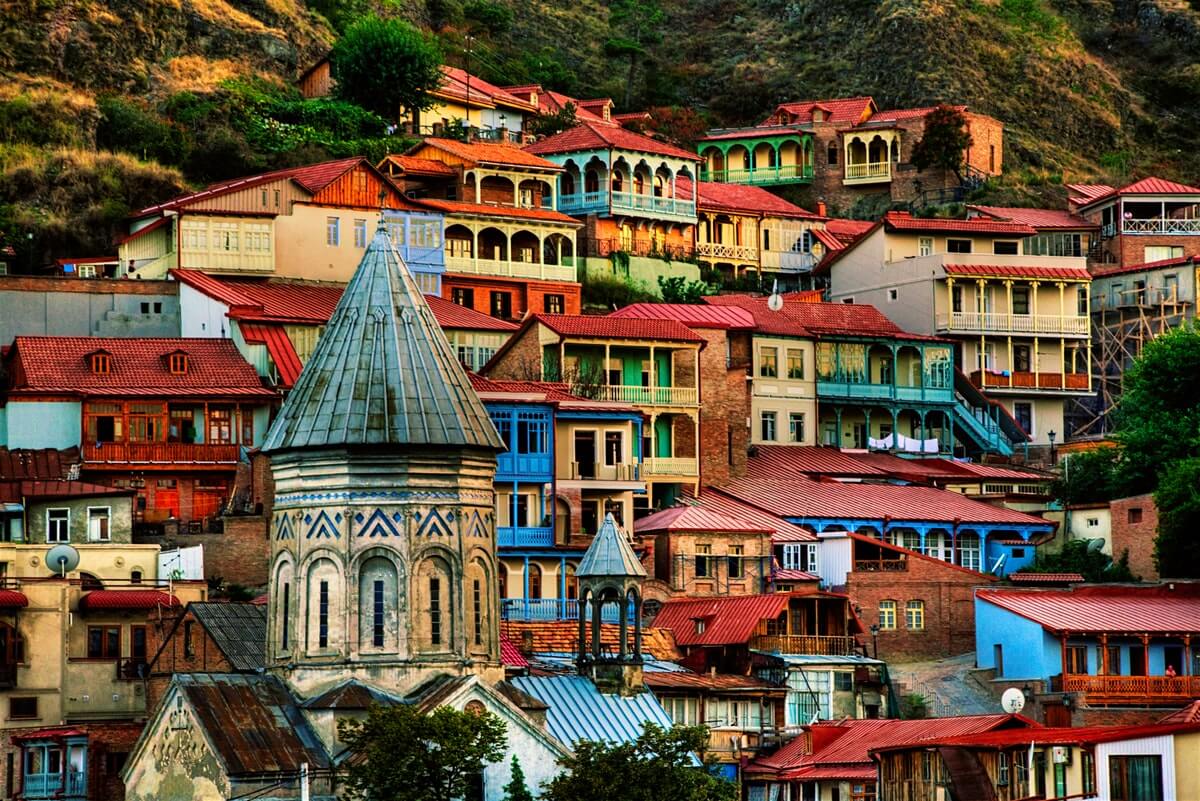 Guaranteed departures to explore the enchanting beauty of the most popular-cultural sights of Armenia and Georgia. 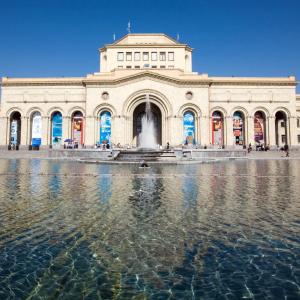 Most known museums in Yerevan

The most famous museums in Yerevan are the following: History Museum, Matenadaran - Central Archive of Manuscripts, National Gallery of Armenia, Historical and Archeological Museum-Reserve of... 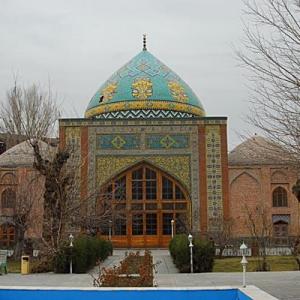 Blue Mosque - Like the other 8 mosques in Yerevan at the beginning of the 20th century, Blue Mosque was closed during the Soviet era. Reconstructed in the late 1990s, it is now the only functioning... 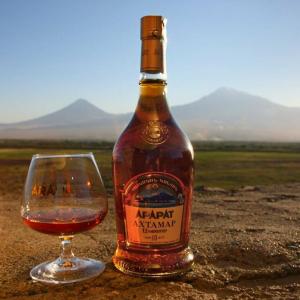 Yerevan Brandy Company lies on a hill overlooking the Hrazdan Gorge in Yerevan. Winston Churchill was known to be a great admirer of the Armenian cognac. The Ararat Brandy Factory offers daily... 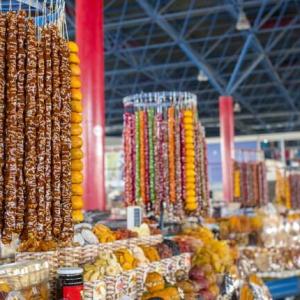 Vegetable Market - The displays of fresh and dried fruits at this covered market are pretty as a picture, so it's fortunate that the stallholders don't seem to mind tourists photographing their...