Armenian people’s traditions and customs have been formed during many centuries. Armenians are very affectionate about their customs, family, work and other traditional values. Even nowadays, in the conditions of the modern world, they strongly respect and preserve certain traditions, for example, by separating the work from the rest time!
Here, the list of Armenian holidays that introduces its traditions is provided. So, in case in case you visit Armenia, you are exactly aware of what celebrations are held during your stay and can be present there. 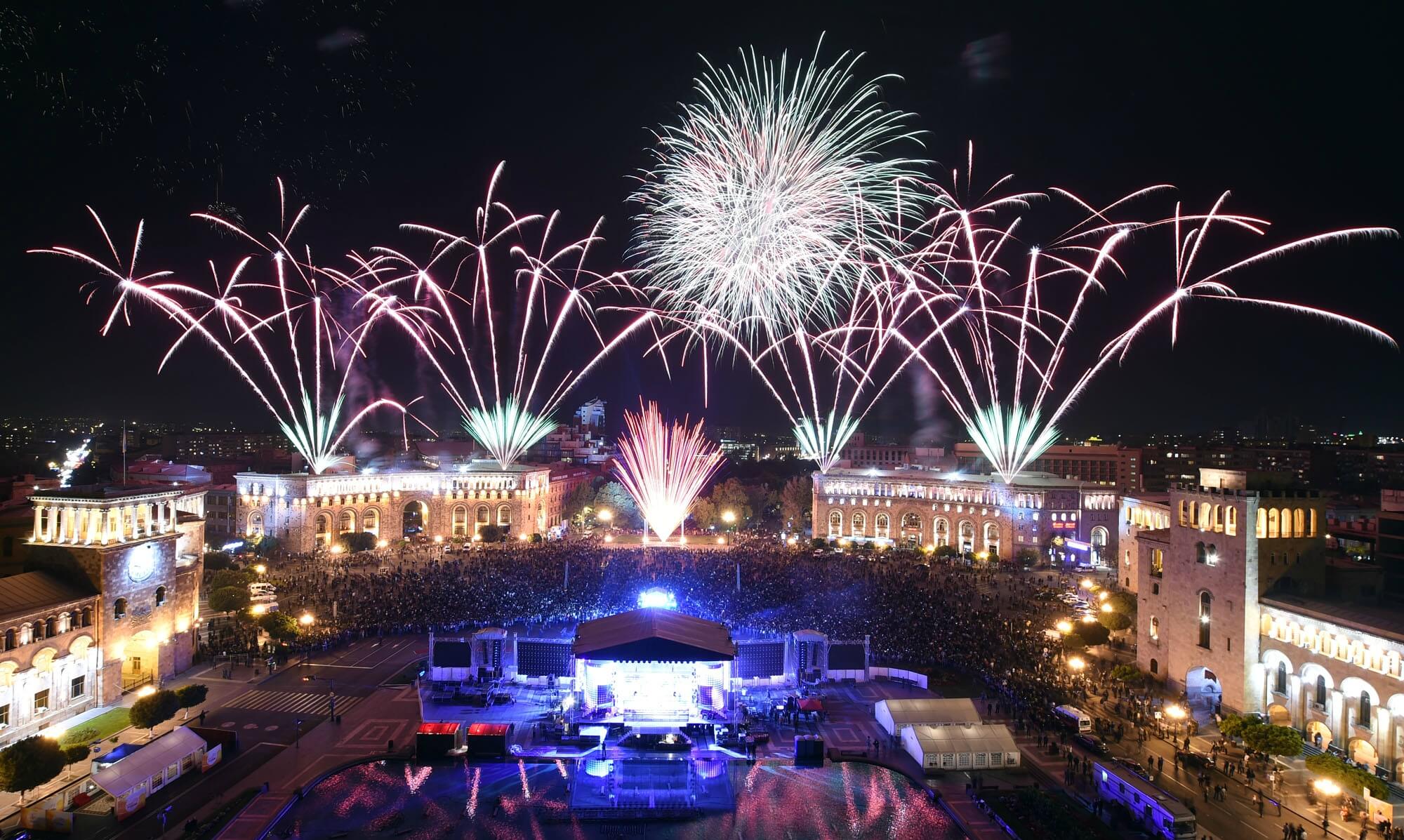 Armenian Holidays #1 AMANOR (NEW YEAR, JANUARY 1)
This is one of the most popular and beloved public holidays marking the start of the year and celebrated a whole week after the holiday.
The traditions
The celebrations start on the New Year’s Eve, December 31, with baking New Year cookies and with a table laden with food and different sweets. During these days, people exchange gifts and congratulate each other. You can be sure about finding the doors of any house open to welcome you.
In addition, Armenians have their own Armenian Santa Claus, Dzmer Papik (literally ‘’Winter Grandfather’’), who is believed by children to bring gifts on New Year’s Eve.

Armenian Holidays #2 CHRISTMAS (JANUARY 6)
Christmas is a religious holiday. It represents the Birthday of Jesus Christ and is celebrated by Christian people all over the world.
The Armenians celebrate this holiday with the Epiphany by attending churches, praying, and lighting candles, and celebrate these two holidays all at once.
The traditions
Almost all the Armenian families attend churches on Christmas Eve and Christmas morning. According to the tradition, the ritual also includes the so-called “Blessing of Water’’, which symbolizes Christ’s baptism. When at home, family members sit at their tables enjoying the Christmas dinner. Traditionally, the major dish of the Christmas are considered to be fish and rice porridge. Wine is also served during Christmas dinner. 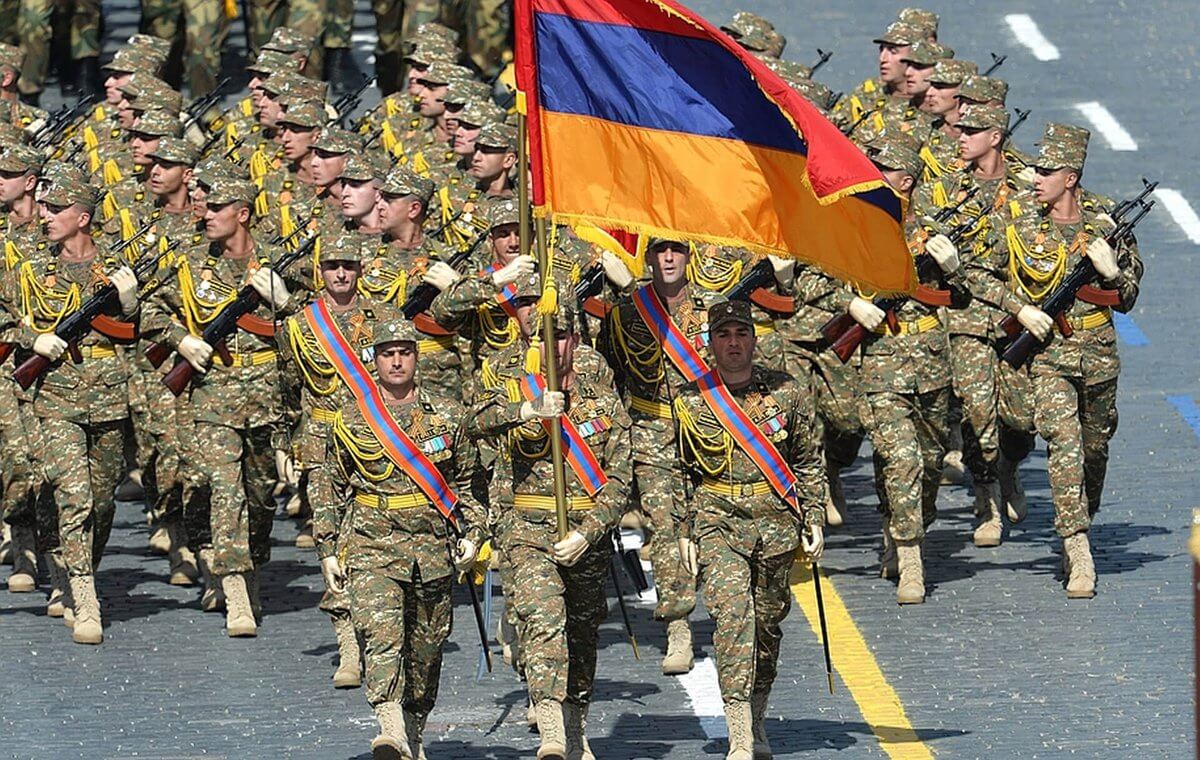 Many nations of the world have an annual Armed Forces Day to commemorate the formation of their military forces. On this day, Armenians all over the world celebrate the day of the Armenian National Army formation.
It was created in the newly independent Republic of Armenia in 1992. January 28th is a very significant date in Armenian modern history.

Armenian Holidays #4 SARGIS HOLIDAY (FEBRUARY)
This is a beloved religious holiday and very popular among Armenians, particularly young people.
Actually, like many other religious holidays and observations, there is no exact date for observing St. Sargis. It is usually celebrated on a Saturday 63 days before Easter (January 18 – February 23 ).
The traditions
It is one of the Armenian holidays mostly celebrated by young people who believe that St. Sargis decides their fate.
They eat salty pies to dream before sleeping in order to see the person who will give them water to drink in the dream. The person they have dream about, according to the traditional belief, will become their future spouse. The young believe that St. Sargis, a handsome young man with a golden helmet and armor, appears and decides their fate. But, there is one thing to certainly remember for the celebration; One cannot drink water no matter how thirsty they are after eating the salty pies! Otherwise, they will not dream about the future spouse of theirs. 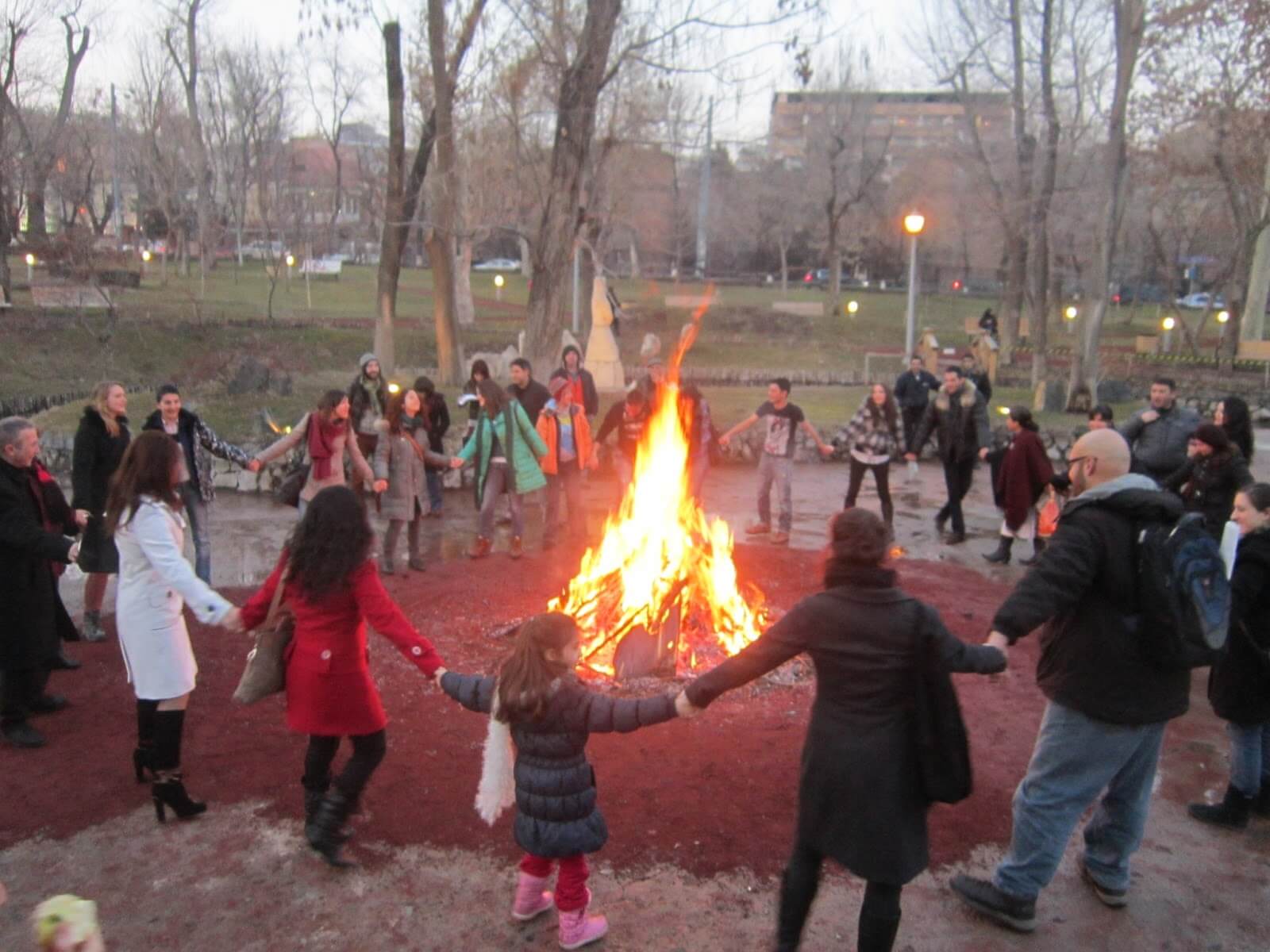 Trndez, literally meaning coming forward to the God or Lord, is also a religious custom, according to which the holiday is connected with the idea of coming closer to the Lord with fire. The celebration of Trndez has pagan origins and is connected with sun and fire worship in the ancient Armenia of pre-Christian period. Later, the Armenian Apostolic Church preserved this tradition as it was very popular among people. Nowadays, Armenians celebrate it on February 14th, 40 days after Jesus’s birth that is believed to be on January, 6th by Armenians.
The traditions
The main part of the Trndez ceremony consists of a bonfire, over which young people (mostly couples) jump, symbolizing the overcoming of difficulties, coming of spring and purification.

Armenian Holidays #6 WOMEN’S DAY (MARCH 8)
This is the International Women’s Day, very popular not only among Armenians, but also almost in all the post-soviet countries. All the beloved women, mothers, grandmothers, sisters, wives, get presents and flowers both from their family members, friends, colleagues but mostly from their beloved ones.
The traditions
Armenians usually celebrate March 8th with their families, friends and spend a good time at home, cafes or elsewhere. 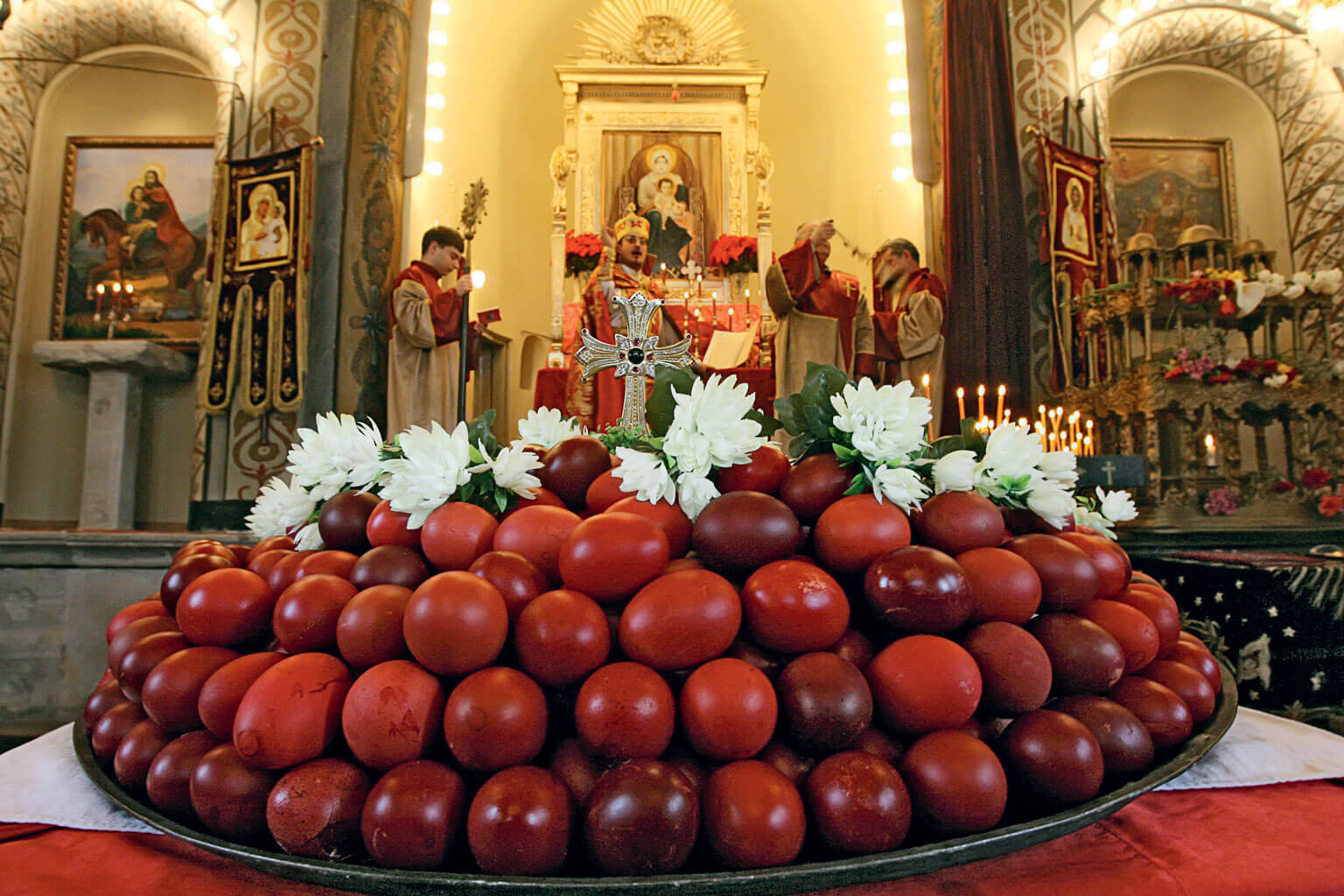 In the Christian world, Easter is considered to be among the most favorite and anticipated holidays. So it is in Armenia: one of the greatest religious holidays of the Armenian Apostolic Church.
The traditions
It begins on Good Friday and lasts during the weekend. There is a special greeting for this day that everybody gives to others during the day: “Christ has arisen”, and the answer is as follows: “Blessed is the resurrection of Christ”. There’s a long-preserved Easter tradition as well according to which Easter eggs are colored into red, symbolizing the blood of Christ. Nowadays, they are colored in other colors too.
Then comes the traditional game: hitting hard boiled eggs of other players. At the end of the game, the winner gets the eggs of the loser, and the final winner takes all the eggs!

Armenian Holidays #8 DAY OF MATERNITY AND BEAUTY (APRIL 7)
This holiday is also dedicated to honoring women. Children present their mothers gifts, flowers. Therefore, the period, from March 8th to April 7th, is even considered as Month of Women. If you are a girl or a woman, be ready that walking in the streets on these days, you are likely to get flowers even from strangers! 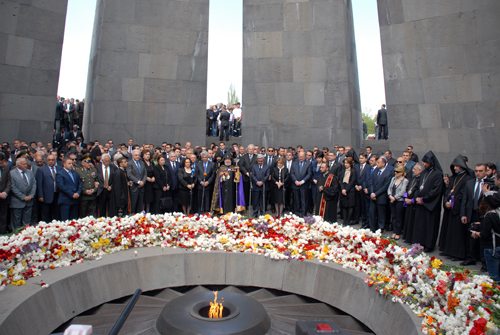 All the Armenians of the world annually honor the memory of 1.5 million of victims killed during the 1915 Genocide (Mets Eghern). This is the day of facing, remembering the historical past and demanding justice for the nowadays generation.
The traditions
Ten thousands of people make a procession to Tsitsernakaberd on foot to pay their respect to all the Martyrs perished in the Turkish government’s attempts to massively exterminate Armenians from their ancestral lands and historical motherland, Western Armenia.

Armenian Holidays #10 HAMBARDZUM (ASCENSION DAY, MAY)
Ascension Day (in Armenian – Hambardzum) is a religious holiday. It presents love and enjoyment; therefore, it’s celebrated outdoors, usually in the blossom of May (40 days after Easter).
The traditions
People believe this is a night of miracles. In ancient times, the young girls were allowed to walk freely in the fields on this day, singing songs, making acquaintances, and often becoming crucial in their lives.

Armenian Holidays #11 VICTORY AND PEACE DAY AND SHUSHI LIBERATION DAY (MAY 9)
In May 8, 1992, Armenian forces liberated Shushi from Azerbaijani military forces and this was a significant milestone in Artsakh war for the newly created Republic of Armenia. This day was also a holiday in the USSR countries to commemorate the victory of World War II.
The traditions
May 9th is an official holiday in the modern Republic of Armenia as well on which the military forces of Armenia and heroes of the World War II go marching through the Republic Square Yerevan.

Armenian Holidays #12 DAY OF THE FIRST REPUBLIC (MAY 28)
On this day in 1918, Armenia restored statehood after half a millennium of lost sovereignty and the first Republic of Armenia was created. The celebration of May 28th still marks the beginning of the modern Armenian independence and is still celebrated in the third Republic of Armenia as well. 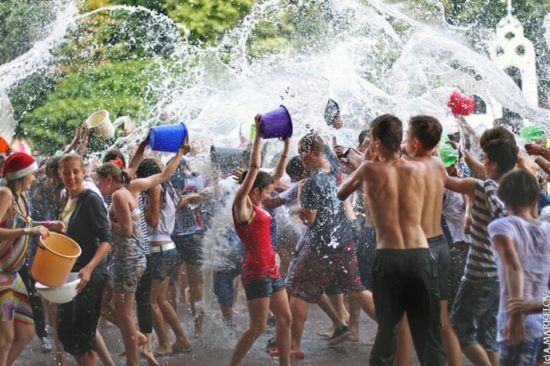 Vardavar, which can literally be translated in two ways as it has two meanings: the flaming of the rose and sprinkling with water, is a great summer holiday usually celebrated fourteen weeks after Easter.
The traditions
In pagan Armenia, Vardavar holiday was connected with the goddess, Astghik. All the people went to her heathen temple for pilgrimage, pouring rosy water on each other.
After adoption of Christianity, the feast was transformed according to Christian Church traditions. On this day, starting from the early morning till the end of the day, everybody pours water on each other one. If you visit Armenia on this day, you should not feel displeased or show you are offended because it’s a long-preserved tradition that Armenians keep from generation to generation.

Armenian Holidays #14 CONSTITUTION DAY (JULY 5)
The Constitution of the third, which is the current Republic of Armenia, was adopted through holding a national referendum on this day in 1995. As a result, this day became one of the Armenian holidays.

Armenian Holidays #15 GRAPE BLESSING DAY (AUGUST)
This religious holiday is usually celebrated on the Sunday nearest to August 15th. The Catholicos of the Armenian Apostolic Church blesses the grape harvest.

Armenian Holidays #16 KHACHVERATS (HOLY CROSS, SEPTEMBER)
This is an official religious holiday which is celebrated by the Armenian Church on the Sunday nearest to September 14th. It is devoted to Surb Khach, the Holy Cross. The Khachverats holiday serves as a memorial to those who have passed away as well.

Armenian Holidays #17 TARGMANCHATS TON (HOLY TRANSLATORS DAY, OCTOBER)
This is one of the Armenian holidays usually celebrated in October and dedicated to the creators of the Armenian alphabet, Mesrop Mashtots and Catholicos Sahak Partev, the first translators and interpreters of the Holy Bible.

Armenian Holidays #18 INDEPENDENCE DAY (SEPTEMBER 21)
In 1991, on this very day, Armenia held a national referendum on secession from the Soviet Union. According to the results announced, the third and independent Republic of Armenia was created and since then, September 21st has been a public holiday to celebrate the event of national significance.
The traditions
Traditionally, there is no particular way of celebration on this day. However, in other countries where Armenian diasporas live, they tend to get together inviting their friends for celebrating their independence day.

Armenian Holidays #19 DAY OF REMEMBRANCE OF VICTIMS OF THE 1988 EARTHQUAKE (DECEMBER 7)
In 1988, there was a devastating earthquake in an Armenian city, Spitak in Shirak region. As a tragic result of the earthquake, thousands of people died and most of the Republic’s infrastructure was destroyed.
Therefore, to remember this tragedy and to express condolences, the date became one of Armenian holidays. December 7th is still the day of remembrance of victims for all the Armenians of the world.