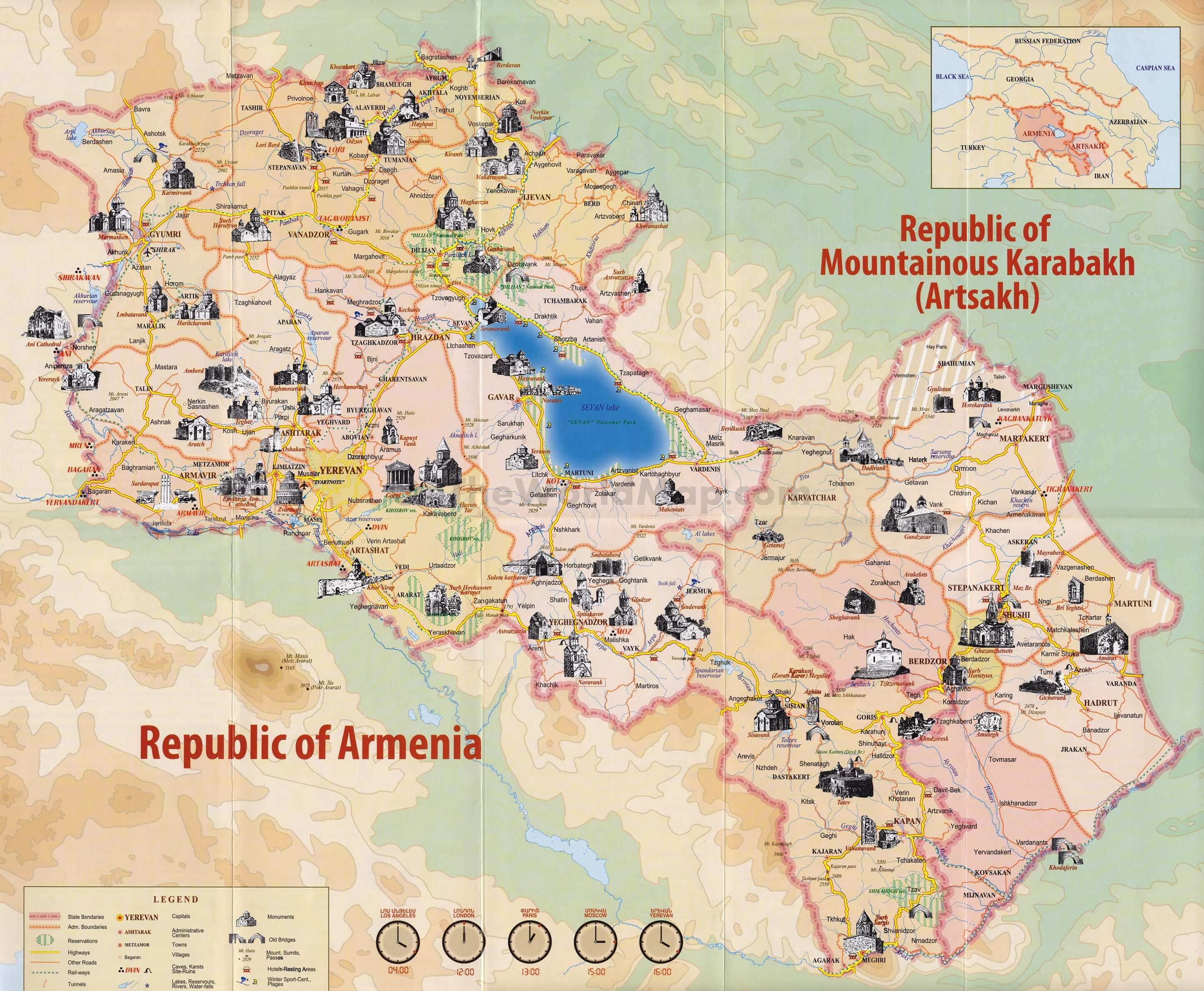 The Republic of Armenia is a state, located on the Armenian Highland, in Western Asia. Bordering countries of Armenia are Turkey (to the west), Iran (to the south), Azerbaijan (to the east) and Georgia (to the north). The capital city of Armenia is Yerevan, with 1 044 000 population.
For centuries, Armenia has had periods of independence and autonomy. It has also been under the sway of such empires as Roman, Byzantine, Persian, Arab, Mongolian, Seljuk Turks, and then the Ottoman and Russian empires.
Modern Armenia represents only 1/10th of the territory of the historical Armenia. Starting from 387, the country has been divided into two parts, which have always been under different empires’ rule.
Armenia is mostly known to the world as a state that was first to officially adopt Christianity as a state religion in 301.
Armenians are also known as a nation who was victim of the Genocide (“Mets Yeghern” in Armenian) conducted by the Ottoman Empire toward Armenians of Western Armenia in 1915, during World War I.
More than 1.5 Armenians were killed and the rest, who survived, formed the present Armenian Diaspora and various communities to be found in many countries and corners of the world.
What Armenians are known for, is their unique alphabet that doesn’t look like any other alphabet in the world. Just like their language doesn’t sound like other language!

Geography:
Armenia is located in South-Western Asia, on the Armenian Highland. The average altitude is 1800 meter above the sea level. The highest point in Armenia is the mountain Aragats (4090 m).
One important thing to know about Armenia is that Armenians living here don’t see their country as a part of either Europe or Asia.
Armenia has always been kind of a crossroad between them, both geographically and culturally.
The total area of the Republic of Armenia is 29,743 sq. km. The bordering countries of Armenia, as it was mentioned above, are Azerbaijan (borderline: 996 km), Georgia (219 km), Iran (44 km), Turkey (311 km).

Climate:
Since Armenia is a highland with little forest-covered land and has fast flowing rivers, Armenian climate is typically highland continental one. For the Armenian climate hot summers and cold winters are typical.

Armenian People:
The total number of Armenians residing in Armenia is around 3 million whereas the number of those outside is estimated to be, according to different sources, 7-8 million.

Mono-ethnicity:
Armenia is known as a mono-ethnic country: more than 98 % of the population are Armenians, 1.1 % of the country’s population is made up by Yezidis and 0.7 % other ethnicity or nationalities (Russians, Ukrainians, Georgians, Greeks, Assyrians, and a few more ethnicity).

Language:
The official language of the country is Armenian, which is spoken by 97.9% of the population. Armenian is an independent branch of the family of the Indo-European languages.

Religion:
Most of Armenians are followers of the Armenian Apostolic Church (92.6%), 1 % are the followers of Evangelical Church. Other churches make up 2.4 %, and unspecified or none is 4 %.

Culture:
What is special about Armenian culture? If one is interested in Armenian history and culture, it is necessary to remember that Armenian culture consists of two very different compounds: Armenian culture of the Pagan period, and Christian Armenian culture.
Armenians of pagan period were initially known as nature worshipers. There was a pantheon of Armenian Pagan gods, like that of Ancient Greece or Ancient Rome mythology (God of fire, God of water, God of war, etc).
The only difference in the Armenian mythology is in the names of those gods. For example, the Greek Zeus is the same Armenian Aramazd, Heracles was the same as Vahagn, Aphrodite in Greek mythology came as Astghik in Armenian, and Tir as Apollo.
How about Christian culture of Armenia? As already mentioned, Armenia is known as the first country to adopt Christianity as a state religion.
Christian religion came to replace not only pagan gods and mythology, but also the architecture, art and customs specific for the pre-Christian period.
Armenians have very unique national songs, traditional dances of both periods, as well as modern dances and songs that truly characterize the Armenian nation.
If you want to better know Armenia and the Armenians, then their songs and dances will tell you more than any book or other source of information!